Group B:
Thursday: 4:30 p.m. to 5:30 p.m.
Friday: 4:30 p.m. to 5:30 p.m.
Saturday:  7:30 a.m. to 10:30 p.m.
[Teachers Group B:  Uttam Bist and Ichha Chand]
Access Kanchanpur
Access students participate in mock Constituent Assembly(CA) Election 2070
Access Kanchanpur-based students from both the groups participated in the Mock CA election. To make the students know about the process and system of the election the students were given three political party options viz. Education Party, Agriculture Party and Tourism Party. Man Bahadur Chand was chosen as the president of the Agriculture Party, similarly PremBaniya was elected as the President of Education Party and Santosh Singh was elected as the president of Tourism Party. The presidents of all the parties then chose their cadres and other members. The students were divided into two constituencies and each political party gave nomination for direct poll in both the constituencies and three names for proportional election to the election commissioner (Mr. Bhim Chand, executive committee member) for five seats Constituent Assembly. Then Election Commissioner provided the political parties with their election symbol. Education Party got ‘Book’ as a symbol of their party, Agriculture Party ‘Corn Cub’ as a symbol and Tourism Party as ‘Himalayas’. After the nomination the political parties are given half an hour time were allocated for visiting and convincing to vote for their political party. All the political parties visited the public(rest of the students) and introduced their agendas and tried to convince public to vote for their political party. The NELTA Kanchanpur branch secretary Mr. Gambhir Chand was positioned as the booth coordinator in region no one and Mr. D.N. Joshi in region no. two. The Access teachers worked as other officers in the regions and NELTA KanchanpurPresident, Mr. Surendra Raj Ojha played the role of the observer.Then, the students caste the votes to their candidates.After the voting the officers counted the votes and result was declared, which is as follows:
Direct Poll
Constituency No.: 1
Winner: Bipin Chandra Joshi(Agriculture Party)
Nearest Opponent: Shikkha Chand(EducationParty)
Constituency No. 2
Winner: KarishmaRana (Educatiion Party)
Nearest Opponent: RekhaBist (Tourism Party)
Proportional Poll
Winners:
Prem Baniya (Education Party)
Man Bahadur Chand (Agriculture Party)
Santosh Singh (Tourism Party)
Then finally the election commissioner and all the officers honored with the Tika and offeredKhada to the winners and made them take the oath, which was followed by a group photographs. 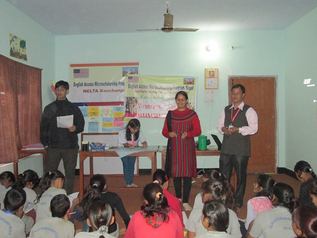 Access Kanchanpur-based students from the thirdcohortcelebrated the Thanksgiving Day on Novmber 30, 2013. All the students and teachers attended the program on time, with lots of enthusiasm. There was an iteraction among studensts and teachers in their earlier classses about the Thanksgiving Day, it’s history and the way it is has been celebrated in  the U. S.. Students enjoyed watching various pictures related to the festival, Thanksgiving Day. On the vary day, the students from both the groups were invited and they were given a text which was related to the Thanksgiving Day. They comprehended the text for one hour whereas the teachers facilitated them. Then the students thanked those who deserve thanks in their life. They thanked their parents, their family members, and their teachers whereas some of them thankedthe U.S. Embassy and NELTA as well for launching Access Program in Kanchanpur. After that, we had a drawing session related to Thanksgiving. The students drew the greetings cards, pictures of turkey, mass potatoes, cranberry sauce, fruits and other food items that are eaten during the festival.Then, thestudents decorated a table with the menu items, which include roasted-chicken, mashed potatoes, beans, dessert(black forest) and salad (as other food items related to the Thanksgiving culture were not available locally).The teachers had worked hard to manage the foods.The teacher alongwith some students decotrated the table. All the Access Kanchanpur center students, teachers and NELTA Kanchanpur executives celebrated the Thanksgiving happily, which was the real flavour of the U.S. festival. NELTA Kanchapur Branch chair, advisors and other executive committee members also wished for the success of the program. 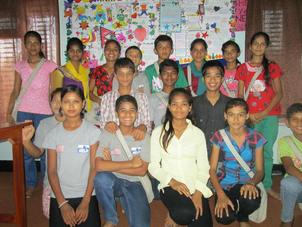 Kanchanpur-based Access students from the third cohort & Access teachers celebrated Flag Day in the presence of Mr. Bharat Babu Khanal, the Access Teacher Kathmandu Center on June 14, 2013.Before celebrating it, he shared his experience about celebrating Flag Day among we all four Access Teachers of Kanchanpur Center. After that he introduced himself among all Access Students formally and started his session on Flag Day celebration in the interactive way. Then he gave brief introduction about the origin of Flag Day and different states of the USA that celebrate the Flag Day. For making his session more interesting he sang a rhyme in which the students and teachers’ active participation was there. After this the students were shown the flags of both Nepal and America and asked the students get idea of making the flags. Meanwhile, Mr. Bharat Babu Khanal gave some guidelines to make the flag of USA. Then the Access students were divided into the eight groups of four and asked them to draw one/one flag of both countries. They were given one hour time to complete their task. While they were drawing the flags we all Access Teachers along with Mr. Khanal were facilitating the students. As a result our students made very beautiful flags of both countries. After making the flags the students were asked to be ready for a group photograph and we all took a photograph by holding the flags of both countries. Again in the closing session Mr. Khanal made all students participate in singing English rhymes and songs.  At last all Access students along with we all Access Teachers did farewell to Mr. Khanal, which was a  little bit sad moment for we all Kanchanpur Access Family.